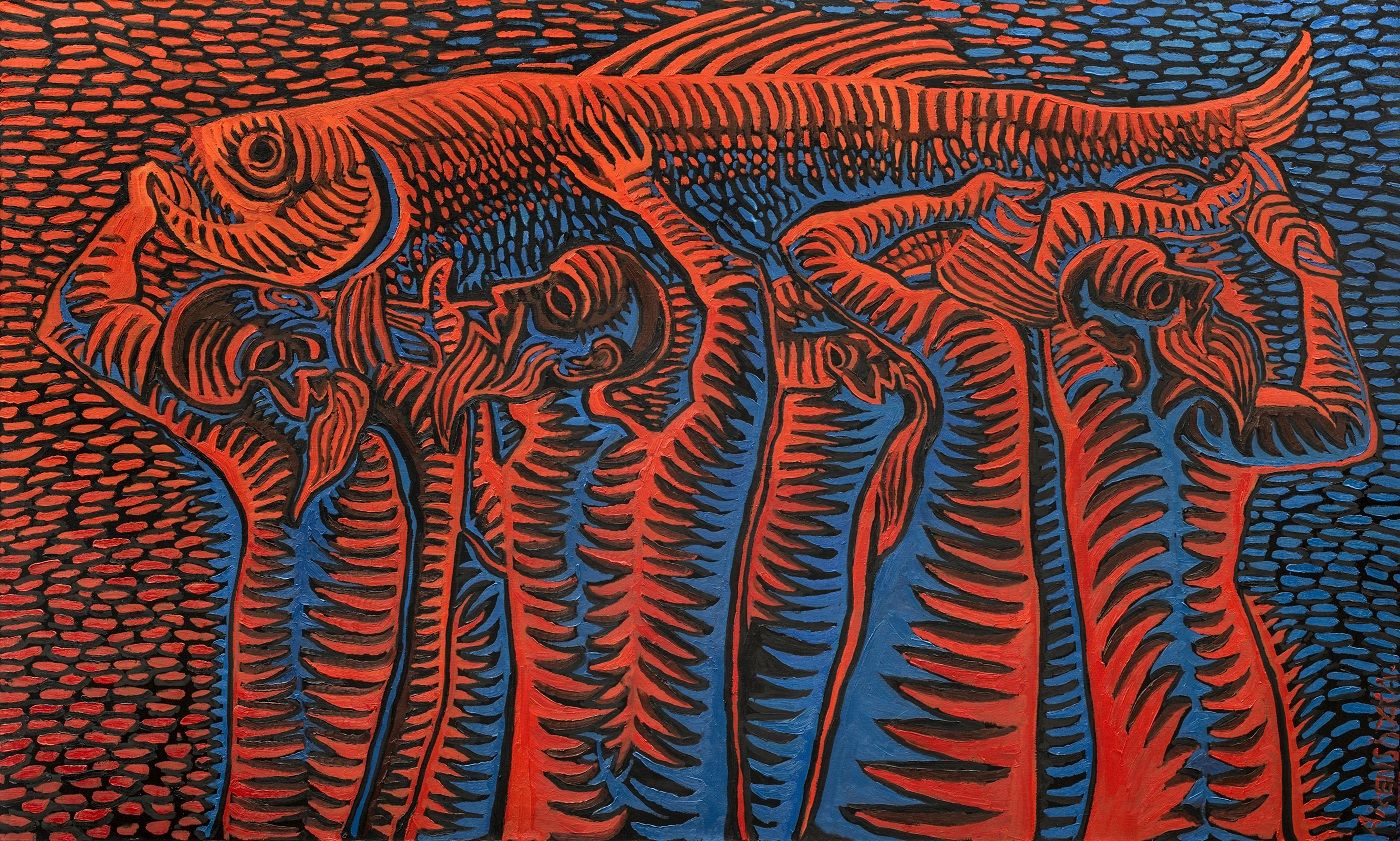 The Spectrum of the Soul

To make serious and lasting art – art that refracts the world back to people in some meaningful way, and that illuminates human nature with sympathy and insight – it is not necessary to be a religious believer but it is necessary to have some sort of larger system of belief, a larger structure of continuity that permits works of art to speak across time.

And what if the art maker, Alexander Aizenshtat, is a religious believer?  Would that impact how serious and lasting his art is? Will the inner journey of his soul affect the art he makes and deepen our experience?

Two scholars recently published work expressing their dismay over the state of contemporary art and culture which helps position Aizenshtat’s art as an antidote to the trends these two scholars describe.

In the book Refiguring the Spiritual (2012), Mark Taylor blames the commodification, corporatization and financialization of art as subverting a higher artistic mission, that of Art’s ability to redeem the world. And in “How Art Became Irrelevant” (2015), Michael J. Lewis explains that “culture’s place has been taken over by the institutions of mass media, commerce, and advertising and are now occupying much of the terrain formerly held by traditional culture and fine art.”

Both point to a similar concern: How serious and lasting can art be if it is sourced by artists whose lives have been largely spent looking down at their screens and not up at the stars? Can an artwork be of value to humanity if the artist lacks a quality of deep, inner experience necessary to cultivate one’s humanity in the first place?

Today, discussions abound about whether or not an artist should be separated from his art. If an artist is morally corrupt, should his art be dismissed? Many say art should be seen strictly on aesthetic terms, and that great art should speak for itself without any reference to its creator. When a rotten human being creates uplifting, beautiful art, we find ourselves in our own moral dilemma: Should we only judge art for its artistic merits or judge the person who made it as well? While this topic is certainly du jour, I dare to turn the issue on its head and ask:  When an artist possesses moral qualities that enrich his art, then will this necessarily spark a desire to engage with the art?

Aizenshtat’s identity and biography is central to understanding and appreciating his art because its value is inextricably linked to the quality of his inner life. In Aizenshtat’s case, we have an artist who bathes in the ocean of Torah as a spiritual man, an Orthodox Jew, a tzadik.  Born and raised in Moscow, with connections to Paris and decades in Jerusalem, Aizenshtat carries a wealth of cultures, languages, and experiences within him. We feel compelled to engage with his body of work expecting that it might transmit wisdom or reflect higher spiritual aspirations. Moreover, since many assume that painting is forbidden among Orthodox Jewry, Aizenshtat’s art-making generates a particular curiosity. Let me explain a bit about aniconism which is defined as the absence of material representations of both the natural and supernatural worlds, commonly thought to be part of Jewish culture.

While some ideas are foolish but harmless, others are not only incorrect but also corrosively destructive. The notion that “Jews don’t make art” is one very dangerous falsehood.

For some it may hard to believe that an Orthodox Jew would be devoted to painting images. “Isn’t that forbidden?” Conventional wisdom holds that Judaism is suspicious or even hostile to the visual arts due to the Second Commandment’s prohibition on creating “graven images”.  Worshipping the invisible G-d, Judaism has been thought to devalue the visual in favor of the oral and aural – words heard rather than appearances seen.

However, Kalman Bland, in The Artless Jew, overturns this assumption that denies to Jewish culture a visual dimension by tracing the history of this modern myth and revealing it as a fallacy. Aizenshtat’s paintings further help undermine this popular but misguided notion, perhaps ushering in a new movement for art historians to explore – “Metaphysical Expressionism”. It is a fitting name for a movement to describe Aizenshtat’s work, as an unprecedented Jewish Art that expresses a faith in Art’s moral/aesthetic responsibility precisely at a moment in history when Art has been put at the service of finance and ego rather than at the service of humanity and the soul.

Aizenshtat’s œuvre can best be situated at the nexus of philosophical, religious and aesthetic issues. It is worth considering the extent to which Aizenshtat’s investment in religiosity extends beyond his personal subjectivity and onto (or into) the Art itself. His paintings possess their own inner invisible dimension, a mysterious realm that extends beyond the surface appearance. His paintings function at the service of a higher spiritual dimension that transcends the visible, material realm.

Familiarity with his biography is relevant insofar as it allows for the recognition of a depth and breadth of experience that expresses itself in paint. Aizenshtat revives the notion of Bildung, a self-cultivation for the greater good of mankind where part of that cultivation involves sharpening one’s aesthetic sensibility and consequently, one’s inner morality. Can we necessarily assume that Aizenshtat’s art will have a higher moral purpose given his identity as an Orthodox Jew?

Dr. Ruth Cohn writes, “Using the learned background of the Torah as well as the profound literature of Pushkin, Kafka, and Dostoevsky, the general viewer can achieve a higher understanding of Aizensthat’s rendition of love, loneliness, hope, despair and prayer.”

“Aizenshtat’s ethical motives that underlie his aspiration to attract his viewers to appreciate his perception of the eternal questions of Faith, the Good, and the Truth are manifest in his special interest in myths and parables through which he presents important values to those who have the strength of mind to understand the sense of his works.”

Aizenshtat creates art that validates the immaterial realm of inner religious, moral and aesthetic experience. As Alexander Yakimovich says of his art: “The pictorial revelation embodies a transcendent spiritual signification.” (Alexander Yakimovich)  The term “Metaphysical Expressionism” is clearly a fitting one.

The phenomenon of splitting white into the colors of the spectrum is like revealing the mysteries of the universe. -Aizenshtat

Chashmal is the word Ezekiel uses to describe the inner light emanating from source. Perhaps Aizenshtat’s paintings seek to evoke that spark of inner light which the eyes perceive as the glow emanating off his canvases.

Aizenshtat’s art remains mysterious and enigmatic. In order to “split white” and bring forth wisdom onto his paintings,  colors are of central importance. He chooses minimal colors for each painting, yet manages to create a powerful relationship between the few he enlists. Red, blue and black are frequently his palette as well as yellows, purples and greys. The colors have symbolic meaning and emit different energies that combine to produce the emanation of that inner light (perhaps eluding to chashmal).

Blue symbolizes the spiritual and celestial while red has the same root in Hebrew as blood, earth and man. Red and blue are two of the three primary colors. It makes the absence of yellow a presence, serving as an implied light that gives the paintings an inner glow. We create yellow in our mind and this informs our perception. What’s more, his colors are effective because they vibrantly saturate the canvas in such a way that the interplay of red and blue heighten the intensity of each individual color and, at the same time, the strong connection the colors have to each other is palpable and supports a harmony that includes a rhythm of black marks, dashes, spikes, lines. All this makes up his mastery of composition.

His paintings prove that compositionally, the whole is greater than the sum of its parts. The paintings can at times be overcrowded with figures, yet nevertheless, he structurally allows for each element to fit together, like individual puzzle pieces producing a harmonious whole. One neither loses sight of the individual parts nor of the greater whole. Both dimensions are held together as if reflecting an intertwined pluralistic reality that is nevertheless an emanation of the One.

Similar to the play of colors against and with each other, Aizenshtat seems to work with vertical and horizonatal planes: Much of the content in his paintings is represented through vertical forms and figures while the format of his work is often mural-sized horizontals (5ft x 10ft). It’s as though he’s emphasizing verticality to express the connection between heaven and earth while the horizontal format lays before our eyes spectrums of figures, of pictorial planes, of lines, of light.

Aizenshtat is a pluralist when it comes to subject matter so it is challenging to make sweeping statements about the subjects he chooses to paint – his work can be allegorical, figurative, symbolic, abstract. Yet I don’t believe the subject matter he paints matters nearly as much as his effort to express the spectrum of the soul.

Deborah Zafman earned her doctorate in the History of Art from UC Berkeley where she was awarded the McEnerrny Fellowship of innovation in teaching. She has published art reviews for Art Press and essays in numerous exhibition catalogs as well as writing for Christie’s. A recipient of numerous fellowships including a Fulbright and the Alexander von Humboldt Chancellor’s Award, Deborah studies art history abroad in Florence, Berlin and Paris and is fluent in six languages. She ran a thriving contemporary art gallery in Paris before returning to the U.S. and coming a Certified member of the Appraisers Association of America.