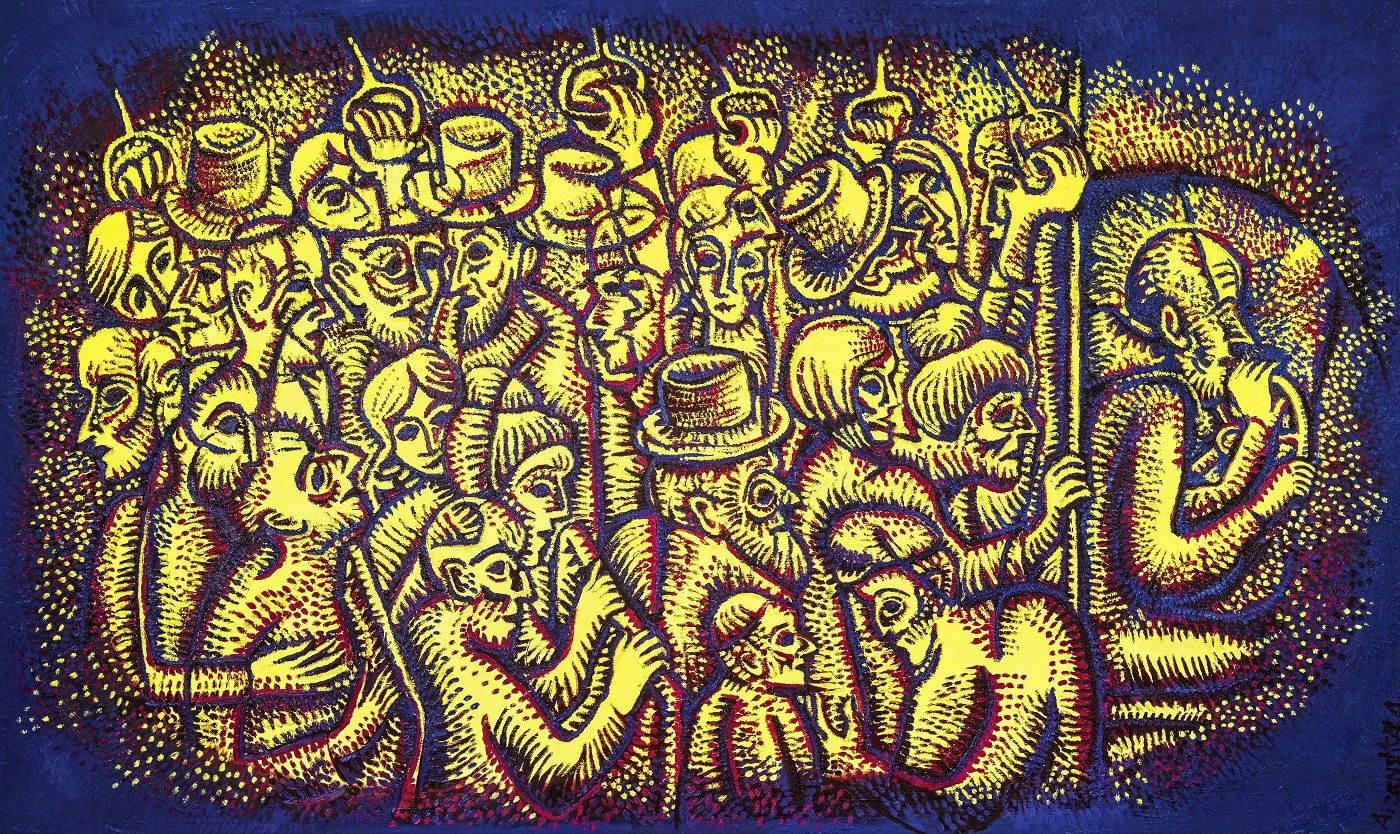 Written by admin on April 8, 2020. Posted in Uncategorized.

What is kept in our memory? The bitterness of being or the joy of expecting a miracle?

The fact that such kind of questions are asked mean that the artist putting them by his creations, has fulfilled his potential. His pictures and paintings will be remembered. And this is obviously very important.

However we need to understand why that happened. To understand, looking at the works. Let them speak to us. Speak with their forms, colors, images.

It’s easy to notice, that colors, not bright by their nature, nevertheless possess a great force of emotional impact. As if they are charged by a strange, magic power, they are full of energy. This energy is perfectly felt, so that it sometimes seems that the surfaces of the canvas accumulate it and send to the spectator, it seems that it is an embodied phenomenon, referring to the creation of all the World. That is the essence. But to understand that, we need to look attentively at the surfaces of canvas, at the colors, at the images.

Besides the mentioned color dullness, that however doesn’t deprive the colors of their semantic depth, we would like to notice some artist’s favorite coloristic scales seen there in the paintings. Particularly ash-gray shadings, which sometimes transform into pearl ranges stay in our memory, but sometimes red and blue tones dominate. This dominating grey tone is an evidence not of “poverty” of the world’s colors, but, on the contrary, an evidence of their richness and diversity. Their smoldering fire shines from inside, like on a site of ashes. In a moment everything could blaze with a fire. That is expected…

In the paintings of reddish scale the red color itself is not monosemantic in it’s very essence. It doesn’t burn, but shines evenly. As if it is kind of radiation. And it is impossible to understand if it is dangerous or not. Here we see kind of induced background, which appears through everywhere. And the red itself is only named “red”, as a keen eye will see the purple and lilac shadings in it. This is not a natural color, it doesn’t exist in “natural” state. It was born by artistic imagination, and it is important for adding an emotionality and specific sense to the whole picture. It is clear that there is not perfect harmony in the world which is shining out with such a “red color” as if by itself. There is something disturbing, warning…

Finally, blue. It’s not “blue” in the usual sense. This blue has its depth. It draws all depicted to some unknown depth, and that adds fancifulness and illusoriness to the whole world represented. It is obvious that the world of a painting is delicate, it is kind of vision. Kind of reminding for one’s memory: “Don’t forget!”. But we don’t intend to forget anything.

The motive of a night and a dusk often dominates. But they are not those nights, which bring nearer to the secrets of being, when it seems that the Universe could be touched with a hand, and the prayer would be heard instantly. The nights and mist, in which not the essence of Being
is revealed, but everyday routine, full, nevertheless, of certain sacrality. The gestures and actions of characters’ figures are full of some ritual pathos. That’s how they eat, drink, walk, how they want to love.

The presented by Alexandre Aizenshtat works are not full of events. You don’t often see an active event. And nevertheless…The reality here is poor, if you start to describe it with words, you’ll be surprised: is here anything unusual? But the painting works not with words, but with signs. And Aizenshtat’s pictorial signs, so colorfully and plastically expressive, have more meanings then any words. They are emotional and conceptual. There are lines, poetic by nature, on a number o canvas, thus a word and a deed supplement each other. But it is easy to notice, the impression of shots from films with subtitles appears. The spectator can’t both look and read at the same time, one or another, as there are different parts of a brain are involved. The attempt to synthesize a word and a deed is curious, but it doesn’t “work” as much as pure painting.

So let’s have a look at the paintings again and again.

The still life works show misery of the table. Sometimes this kind of serving is supplemented with simple and unpretentious bouquets. The flowers are about to fade, there is a deep darkness around the table, only light of a lonely lamp will shine the sad household life, and a solitary moth will fly in attracted by the light. We would like to note, that the artist believes in the expressiveness of hands. There are often some pairs of hands of some unknown (because they are not shown) characters, participating in a meal in these still life works.

Aizenshtat believes in the expressiveness of hands as it is. He also likes to show heads separately, always with a thoughtful look of the face, always sad. There are not many young people at his paintings, and those who bear the marks of hard experience. Separate figures are shown in the dark streets, in the gardens, next to big trees. Essentially, that’s our days, but that
which goes away, slips off to the past: the people sitting in the compartments of coaches are moved at night, and it’s unknown from where and where to. The present leaks to the past by itself. That’s why somebody is going to end at the dump, somebody lives at the candlelight.
Many characters stay by high trees, as if spellbound by these powerful symbols of the nature. otherwise everything is happening, as a rule, under cover of night and darkness. Everything is mysterious.

Aizenshtat shows, that the world is aiming to be constant. The simple meal, at trees and gardens, to the remote small towns and quiet life in a village. Shall we believe all these?

Yes, as long as the spectator is in front of the master’s paintings, he believes. But maybe, captured by these wonderful visions, he will see the hidden phenomena in the modernity. After all, in the darkness, in red or blue shining of the substance, some truth is revealed from inside. Humane in humane. When an absorption in oneself or simple everyday chores let us see more then the modern civilization, masking everything. For sure, we deal here if not with the definite kind of philosophy, but indeed with the definite view at the Universe. It’s typical for an artist, and can’t work the other way. And we understand that.

Essentially, an artist is lonesome. As a teacher, as “rab Alexander”, he has a lot of purples and friends. But as an artist he is lonely. He should had copied (although in a different cultural and religious surroundings), in a special way, the destiny of Van Gogh. That one wanted to become a pastor for the poor, but then became an artist. Aizenshtat stays a teacher, a mentor and an
artist. As an artist he adds up to that, which is difficult to formulate in words. The language of painting, which seems so simple at his works, appeared to be wise as well.

So, the loneliness. It is necessary to notice, that all the items in the paintings are isolated, there always are notable intervals- pauses between them.. And people also are by themselves, even when they are in a crowd. Yes, there is an interest to gestures, to poses. And that’s because the
silence dominates. The artist, treating the modern civilization (with it’s loud noise nuisance) with suspicion, has noticed, that people are uncommunicative. And he warns about this threat, persistently, but not importunately. Of course, he is not the first, who witnesses this. But the voice of an artist is important for us. The artist pontificates about urgent matters in a lyrical, confessional manner, and with enviable mastery.

In the spirit of his art he is an expressionist. The expressionism, being born at the beginning of XXth century, has never died. It is notable, that one of Aizenshtat’s paintings is called “The last scream”, reminding about famous picture “The scream” by Norwegian artist Edvard Munch (1893), which had preceded the birth of expressionism (in this case we can call it “The first scream”). The expressionism always showed, that the situation in the world is far from well- being, and it is necessary to worry about the world’s fortune. This “ism” was like that, and it is like that in our days, joining the wide flow of nowadays’ postmodernism.

Valery Tourchin
Doctor of Art Criticism, the Honored Professor of Moscow State University, full Member (Academician) of Russian Academy of Arts, head of the Department of “History of Russian Art”, Senior Researcher of the State Institute of Art Studies, Head of Methodical Department of the Moscow Museum of Modern Art.